Choose Your Own Adventure: The Great Antler, Chapter 3 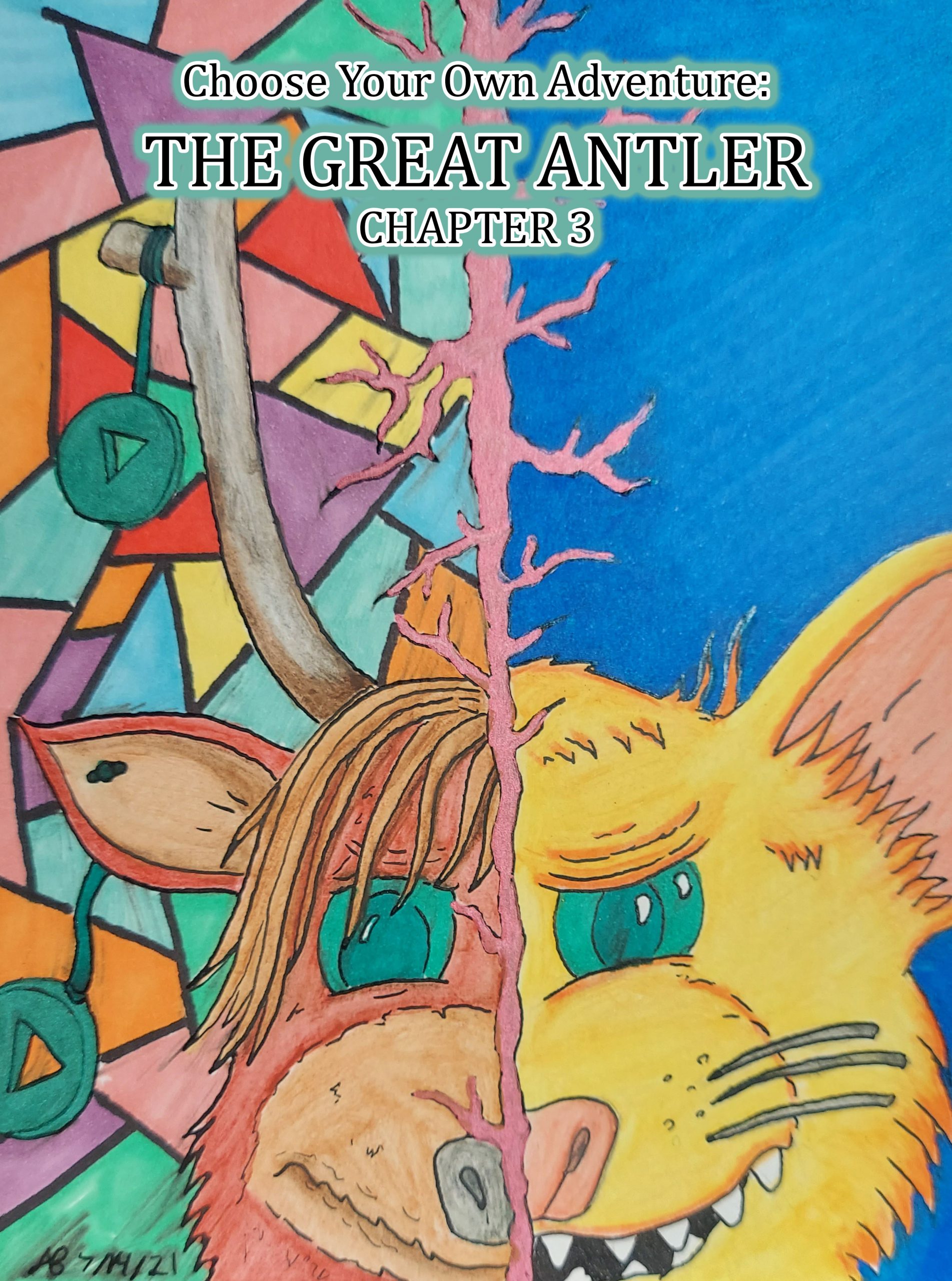 This is the third chapter of The Great Antler series that’s currently in development. Choices can still be made in this chapter by voting on the latest post on the Steam Pony Design Facebook page. 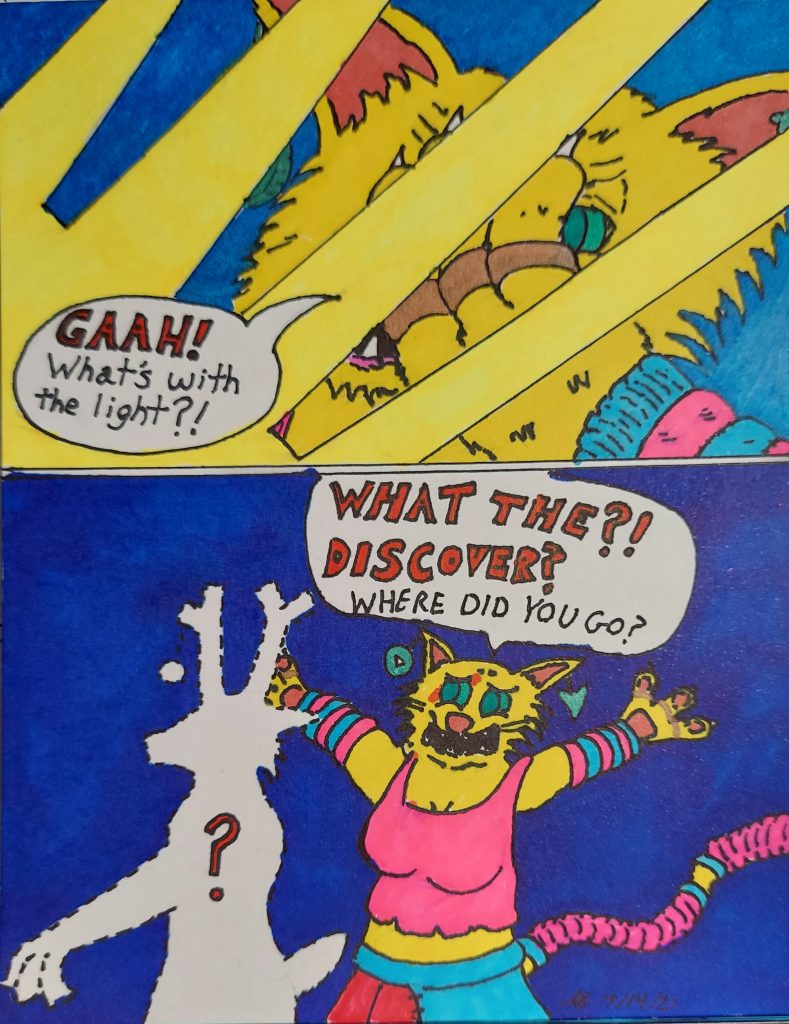 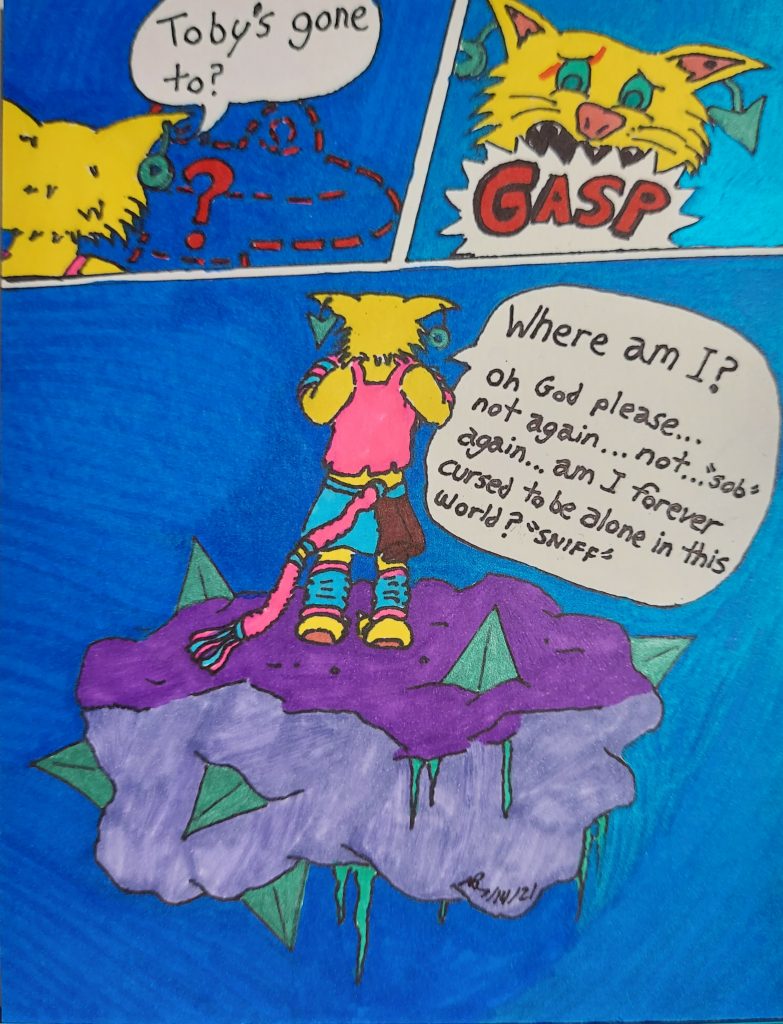 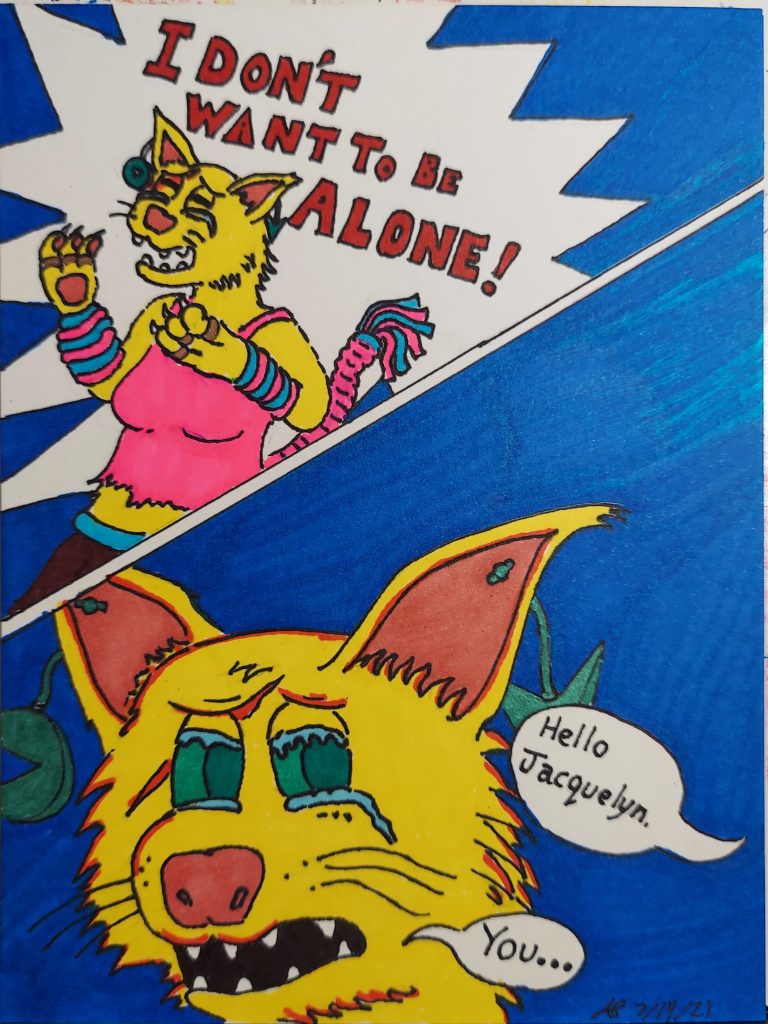 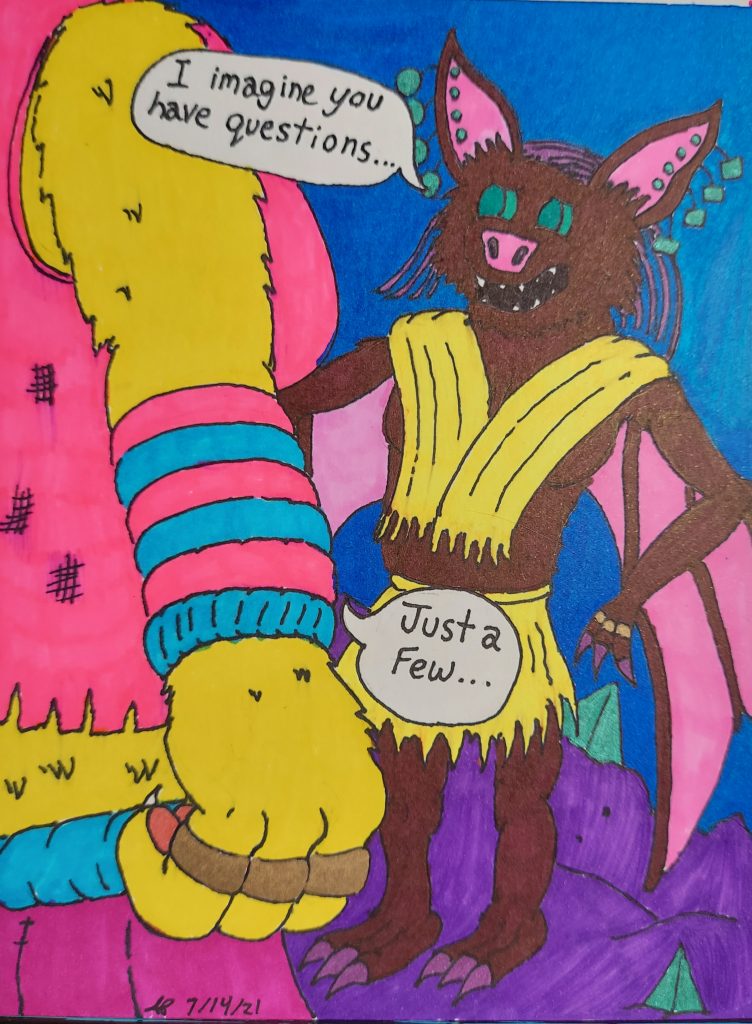 Jax stared at the floating wisp in puzzlement. What did it mean by choosing a doorway? Jax turned to ask Discover of his opinion on the matter, when her eyes were suddenly blinded by light. “Gaah, what’s with the light?!” Jax tried to shield her eyes but as quickly as the light came it was gone, and so was Discover. “What the?! Discover, where did you go?”
Jax quickly turned to Toby, only to see he was gone too. Jax suddenly gave a loud gasp. The tower, the wisp of light, the raft, the whole landscape was gone. “Where am I,” Jax exclaimed? Jax found herself on top of a floating rock of land in the middle of the sky with no sign of the ground she was previously on below her.
Jax began to panic. “Oh God…please…not again…I don’t want to be alone…” tears began to well up in her eyes thinking of her time spent in this world. “Am I forever cursed to be alone in this world?”
“I DON’T WANT TO BE ALONE!” she screamed.
Her words echoed out into the empty sky and suddenly there was a faint reply.
“Hello Jacquelyn.”
Jax knew that voice. “You…” she said coldly.
Trish stood behind Jax wings folded in a sombering way. “I imagine you have questions…”
Jax turned around with conflicting thoughts in her head. Trish had helped her out a lot but yet there were some deep buried conflicts between her and Trish that were bubbling up from her past.
Jax clenched her fist and said, “Just a few…”

What question do you want to ask first?

A:) What did you do with Discover and Toby?
Or
B:) Where am I and why are you here? (Choice B was chosen) 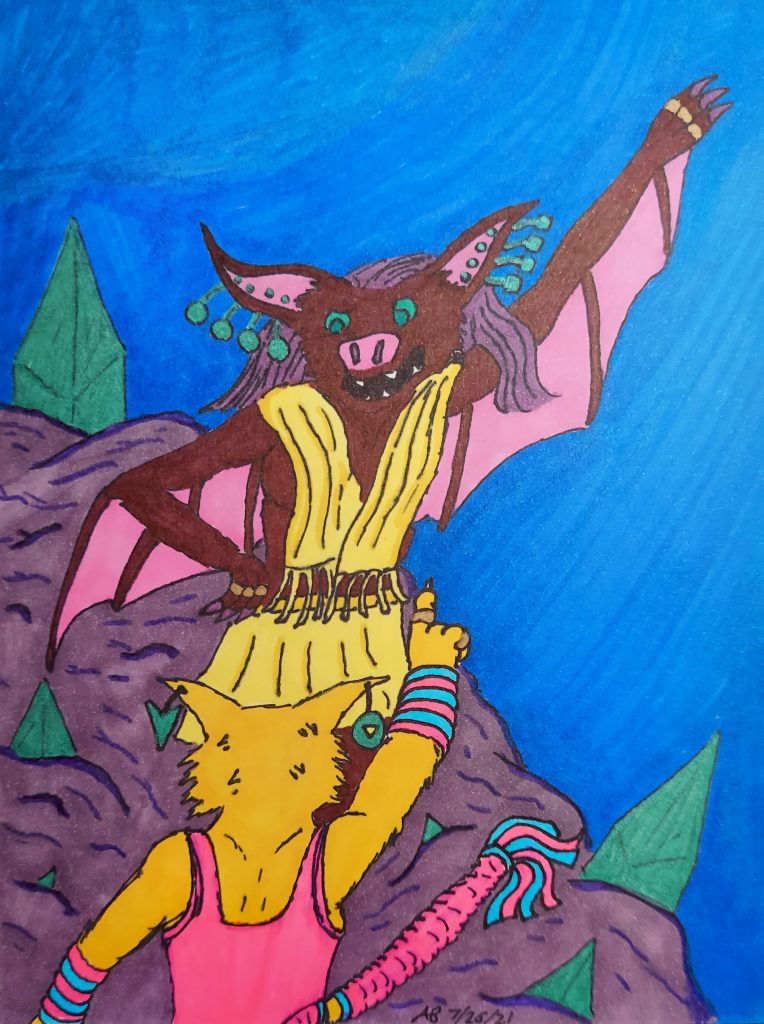 “WHERE AM I AND WHY ARE YOU HERE?” Jax screamed as her anger came to a boil.
“WHAT DID I DO WRONG THIS TIME TRISH? DID I BREAK ANOTHER ONE OF YOUR RULES OF THE LAND? SHOULD I HAVE JUST LEFT DISCOVER TO WANDER INTO ENDLESS DANGER SCARED AND ALONE LIKE I DID?”

Trish stood there with an annoyed look on her face. “You finished?” She asked, waving her hand up in gesture. “I know I’ve been strict with you in the past…”

“STRICT, YOU WOULDN’T EVEN LET ME STAY WITH ANYONE THAT I MET,” Jax was letting all of her anger out upon Trish. “WHY AM I NOT ALLOWED TO DO ANYTHING TRISH? WHY AM I…”
“I DON’T WANT YOU TO GET HURT AGAIN!” Trish Screamed startling Jax.

Tears welled up in Trish’s eyes. “I…I don’t want you to get hurt again…and this…this is the hardest thing I’ve ever had to do…”

Jax suddenly felt regret for letting her anger out. Trish looked really upset and hesitant on what she wanted to say.

“I’m…I’m sorry Trish…You were there for me at my greatest need and I owe you greatly for that. I just…”

What do you do next?

A:) Walk over and comfort Trish and ask what is it she has to do? (Choice A was chosen)
OR
B:) Stand and wait for Trish to respond. 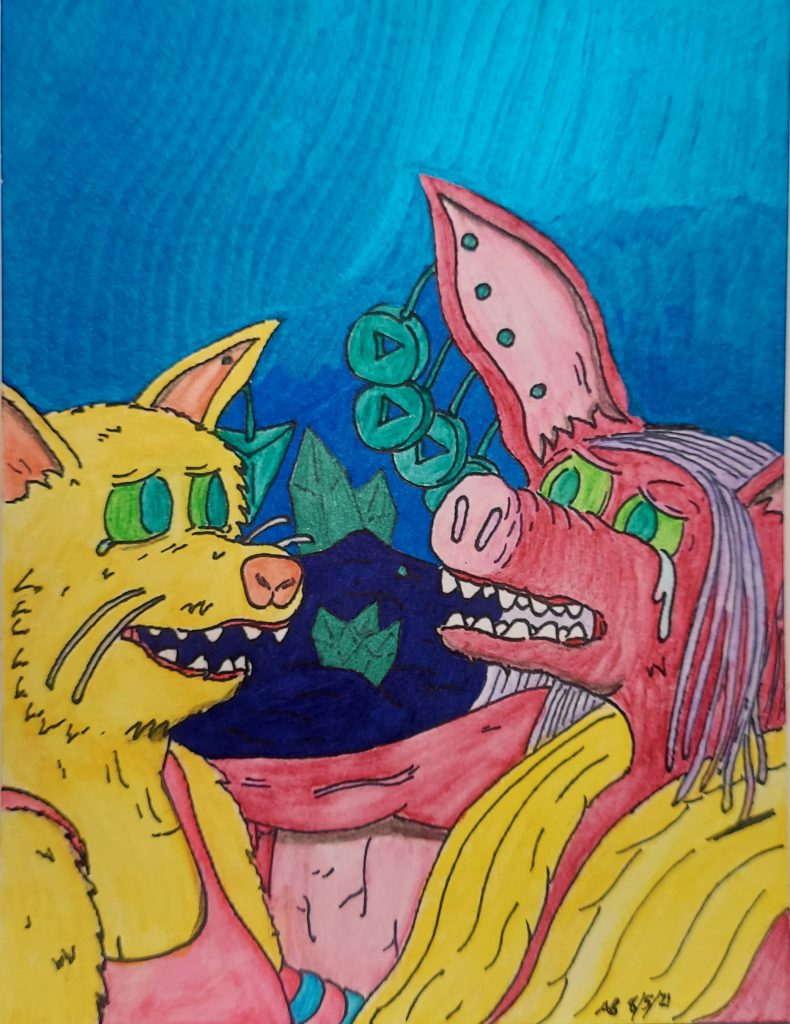 Jax walked over to Trish, laying a hand on her shoulder. “What is wrong, Trish?”

Trish looked at Jax through her tear soaked eyes. To her she was still just a scared little girl, wandering through the woods oblivious to the dangers around her. Who would be there to help her if she got attacked again? Who would mend her wounds and teach her skills to survive and avoid further dangers? Can Jax really be the key to the Great Discoverer’s journey? She scolded Jax every time she tried to leave the area of her protection, keeping her from harm all these endless years. But it was time.
“Jax…it is time.”

Jax looked puzzled, “Time for what?”

“It is time for me to fulfill my quest, I have watched over you all this time for this moment. You are like a daughter to me and like all mothers I must now let you leave the nest.”

“You…you brought me here to let me go? But why did you separate me from Discover and Toby, I don’t understand?”

“I didn’t, The Great Antler did. Jax, The Great Discoverer has to do this next part of his journey on his own. He has a quest to complete, as do you.”

Do you
A:) Ask, what kind of quest and why now? (Choice A was chosen)
or
B:) Ask, how am I going to go on a quest floating up in the sky? 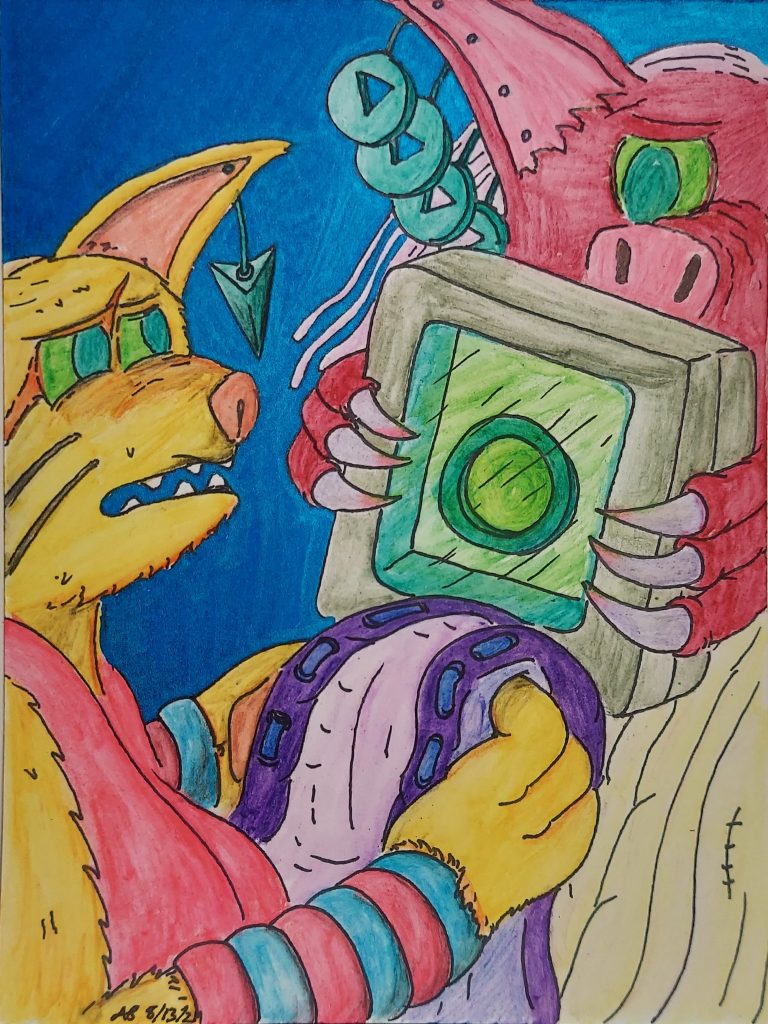 “I…I still don’t understand Trish? What kind of quest and why now?”
Jax had more questions than answers right now, and she was really starting to worry about her friends, especially Discover.

“I need you to deliver something Jax,” said Trish as she presented Jax a glowing ring framed inside a thick case.

“This is the Key Jax. You were chosen to be the one to deliver this key when the time comes, and that time is now. I was charged by The Great Antler to keep you safe from harm till this very moment. That is why I had to be so strict with you Jax. I am sorry for the feelings and friendships I’ve kept you from but you must understand you and this key is well the key to everything and I couldn’t risk anything happening to you especially after that horrible encounter you had when you first got here long ago.”

“But I thought Discover was the key?” Jax said, confused.

“You both are Jax, I am unsure what Discover’s final destination is, but The Great Antler told me that you and your quest would be key to it. But I must warn you, this will not be easy because in order for you to do this quest…I have to send you to another world.”

“This is why I am having such a hard time with this Jax. You’ll be completely alone for this and I don’t know what dangers you will face. I don’t even know where you’re supposed to take this key except that The Great Antler said you’d know when you saw it.” Trish began to tear up again as she picked up a piece of clothing. “Even though I can’t be with you, I made you this cloak that will protect you from harm. I’ve enchanted it with many powers that will help you on this journey.”

Jax held the cloak in her hands. It felt soft to the touch, the purples of the fabric shimmering in the light.

A:)Accept the quest (Choice A was chosen)
Or
B:) Question what would happen if you don’t do the quest 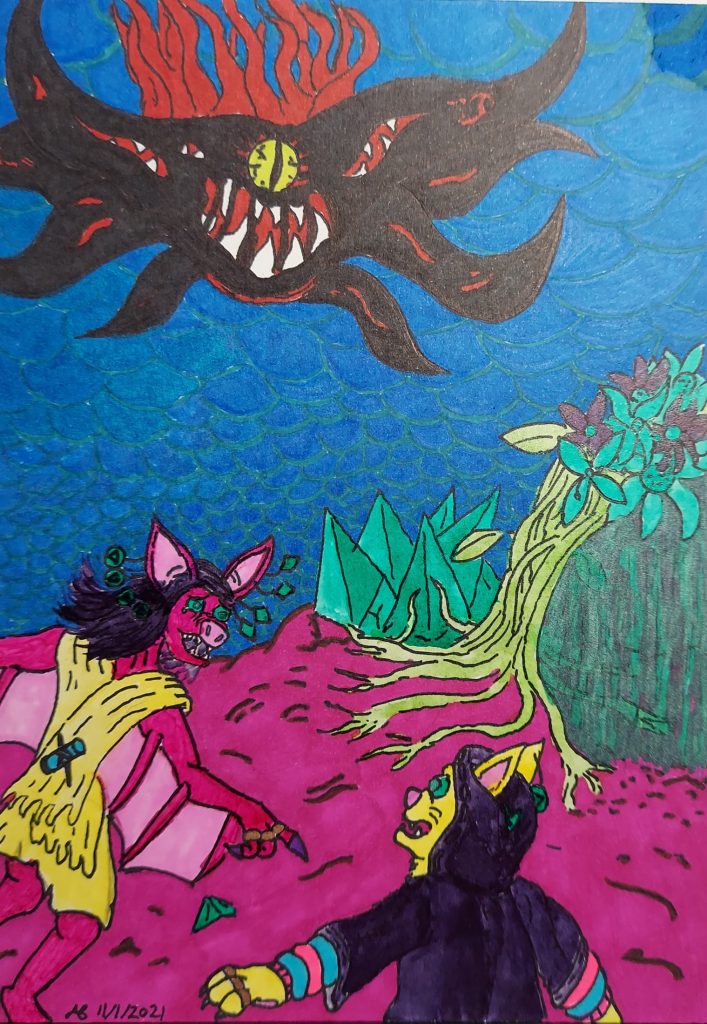 Trish placed her arms on Jax’s shoulders. “Then may The Great Antler protect you.”

Trish took a step back and began an enchantment. The small floating island began to tremble as the green crystals growing out of it began to glow. With a slithering sound green vines began to grow out of the ground forming an archway in front of Trsih and Jax.
Jax stood in awe watching Trish’s enchantment at work making the most beautiful archway of vines she had ever seen, each one topped with vivid glowing flowers. As each flower bloomed, pollen began raining down under the arch making the space underneath all wavy looking.

“It is done,” Trish said as she ended the enchantment. “Cross under the archway and you will be transported to the other world on the other side.”

“I won’t let you down Trish, I will find where this key needs to go and will find a way back to you and Discover,” Jax stated as she placed the cloak over herself.

“You have grown up so much Jax,” Trish said with tears welling in her eyes. “I will see you again after your quest, now I must…”

Trish’s face turned to horror as she looked up to the sky. “JAX GO NOW!”

Jax turned and saw the horror Trish saw. A Giant winged absorber was swooping down straight towards them, making a horrifying screech.

“What about you, Trish? I can’t leave you in this danger!”