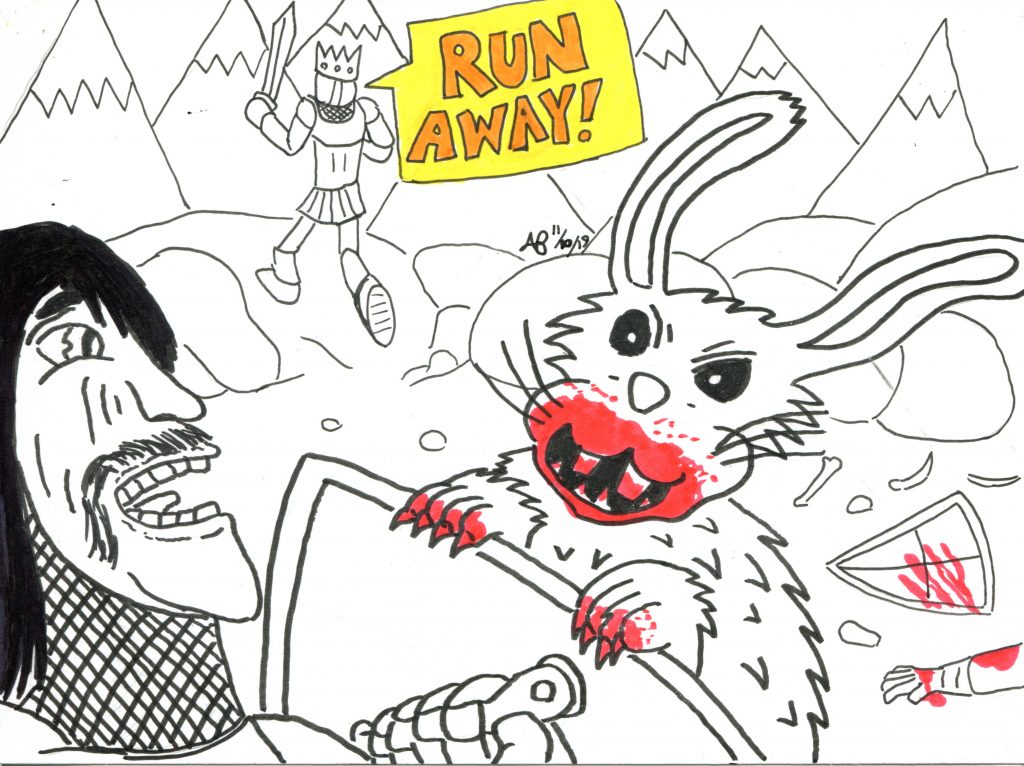 Behold the monster of day 10 in this years Monstervember. Hoards of men have entered its lair and none have lived. Are you brave enough to face the terror with the nasty big pointy teeth? 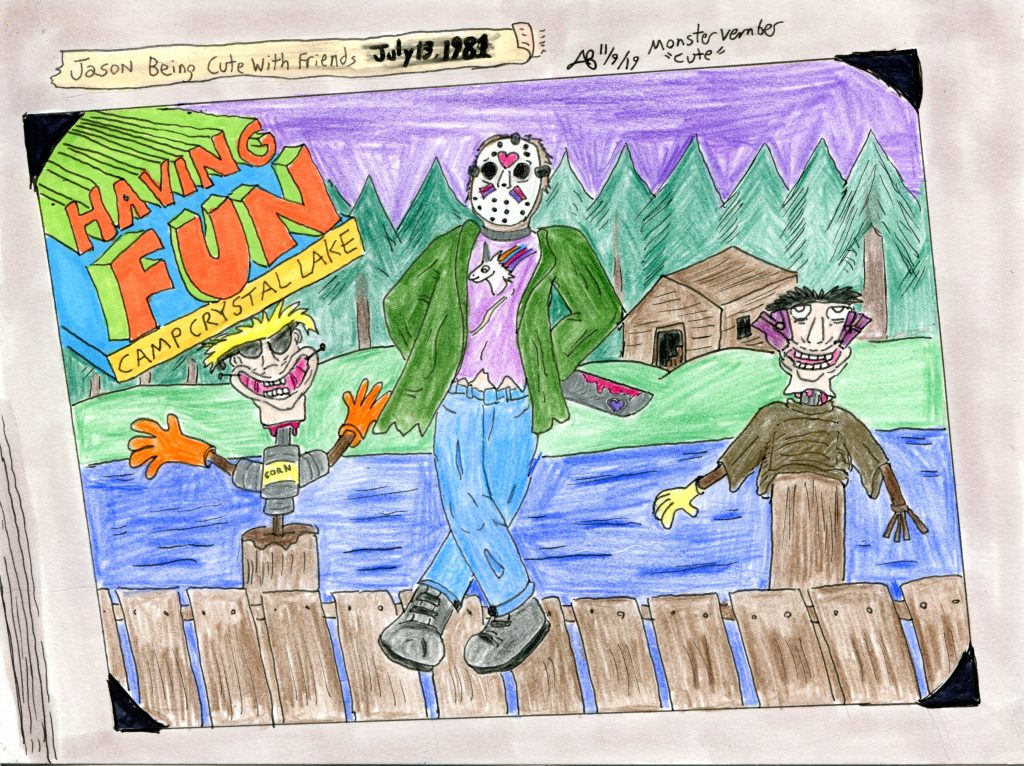 It’s the cute Prompt of Monstervember and look how cute Jason is with his unicorn shirt and smiling friends.

My wife asked what’s wrong with me? Cause she knows I can draw cute. But it’s monstervember and I can’t do serious cute right now. It has to be satire in its nature. 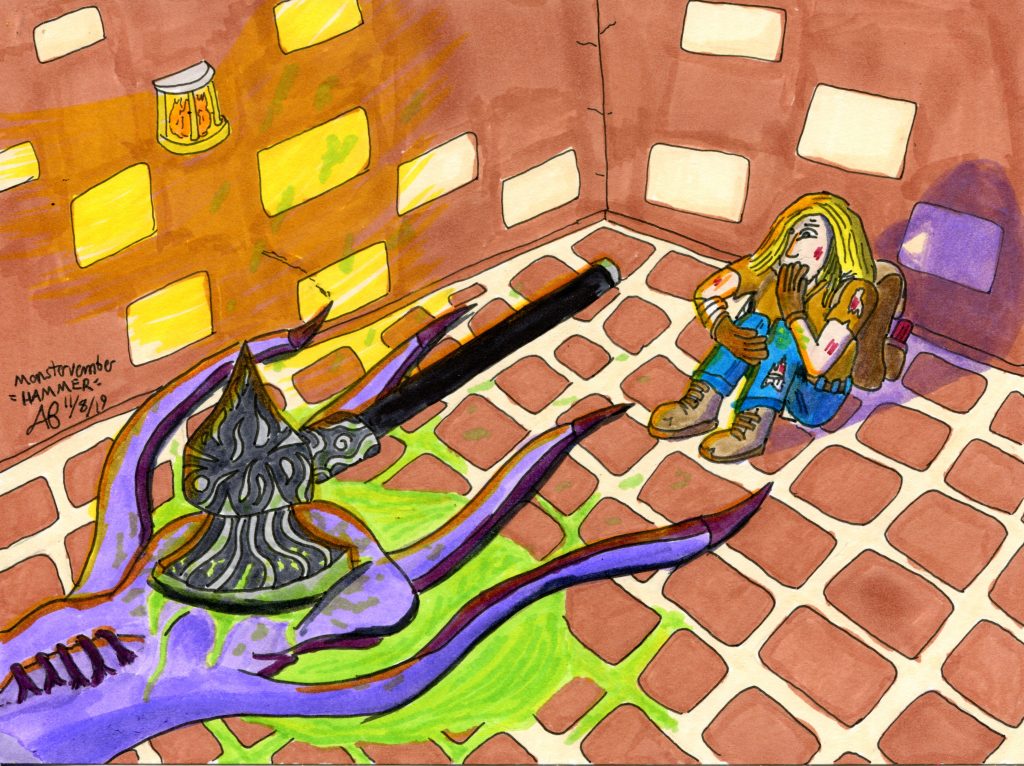 It’s Monstervember Day 8 and we have a heck of a story going on in today’s sketch. Our main character a female adventurer is struggling with the shock of what she just had to do. This adventure has brought much turmoil and pain and has reached a major climax of having to take out a horrid tentacle beast with a massive hammer. Pure adrenaline allowed our adventurer to lift such a massive hammer and smash the beasts head in. But it has taken it’s toll on her and she is exhausted and her nerves are shot.

I tried some highlights and shadows with this one and they turned out pretty cool. Probably still not correct but practice makes perfect.

See you tomorrow for Day 9, Cute. 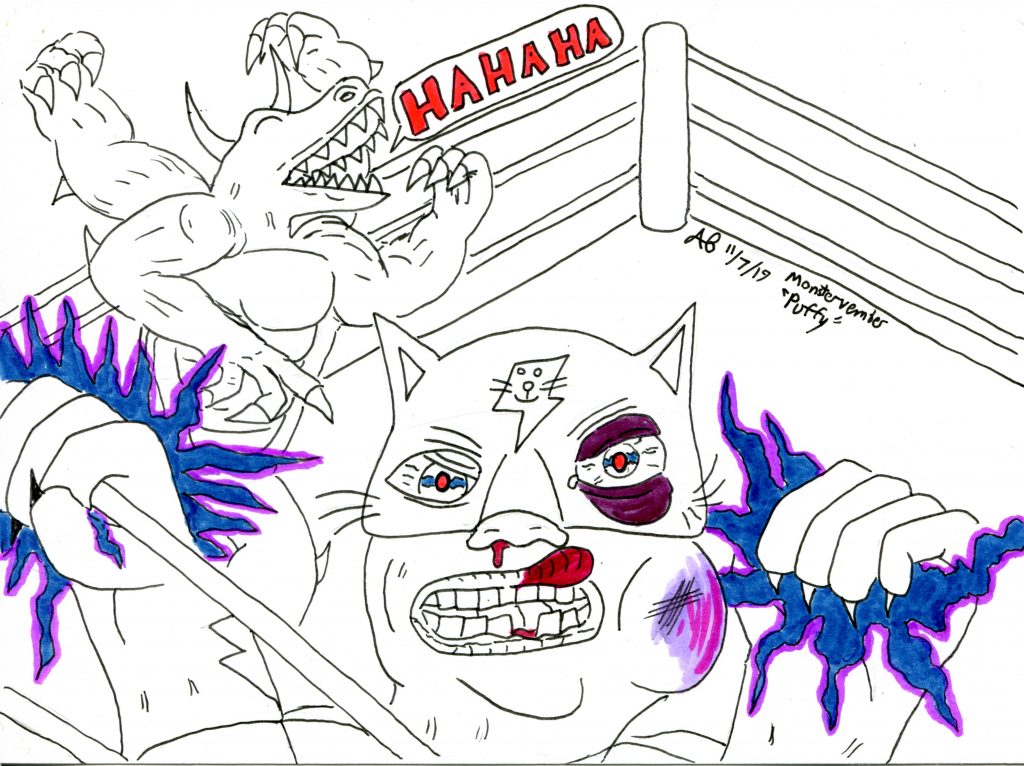 It’s Monstervember Day 7. Electric Kitty has taken a brutal beating and is on the ropes and has a puffy lip, eye and cheek. Time for an epic comeback as Four-Arm-Rex gloats at our heroes condition.

It’s Monstervember Day 6 and the nuclear apocalypse has been quite hard on poor little benny. He’s gone all thin from hunger and is turning into a crazed feral ghoul. Wouldn’t want to run into him on the lonesome road in the wasteland.

See you tomorrow for Day 7, Puffy. 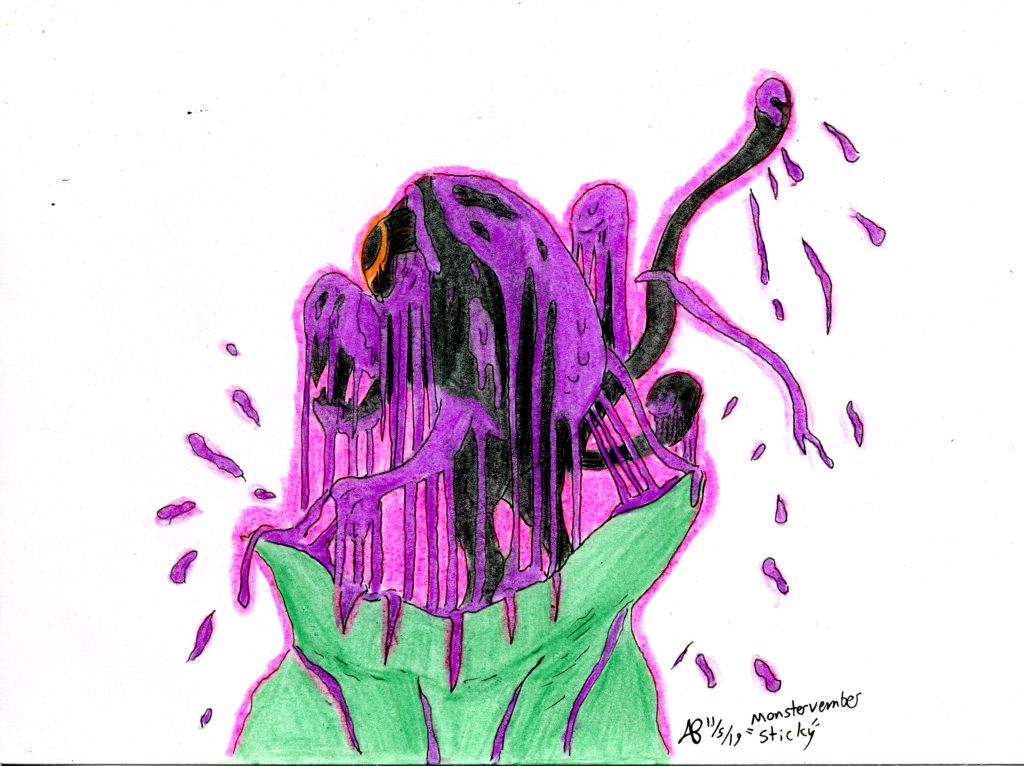 Today’s monstervember prompt was Sticky. So we have a newly born monster hatching out of an egg. It’s all covered in sticky slimey goo and is slowly freeing itself from its sticky prison. Kind of has some Lovecraft inspiration with the tentacles and such. Played around with some colored pencils for this one today.

See you tomorrow for Day 6, Thin. 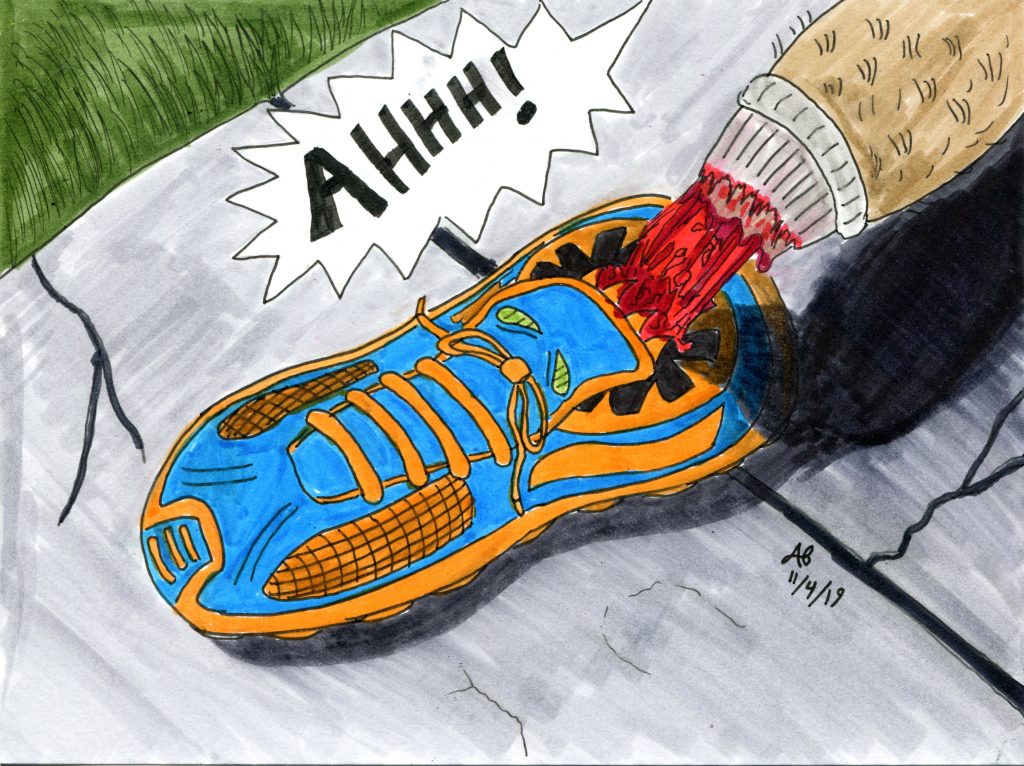 May want to be careful where you buy shoes from. You may end up “footloose” Gorey puns you can’t ask for anything more cringe worthy.

I tried messing with shadows being cast at an angle on the ground. Didn’t quite work out correctly but I’m trying.

Let’s see what I can come up with for tomorrows Prompt, Sticky. 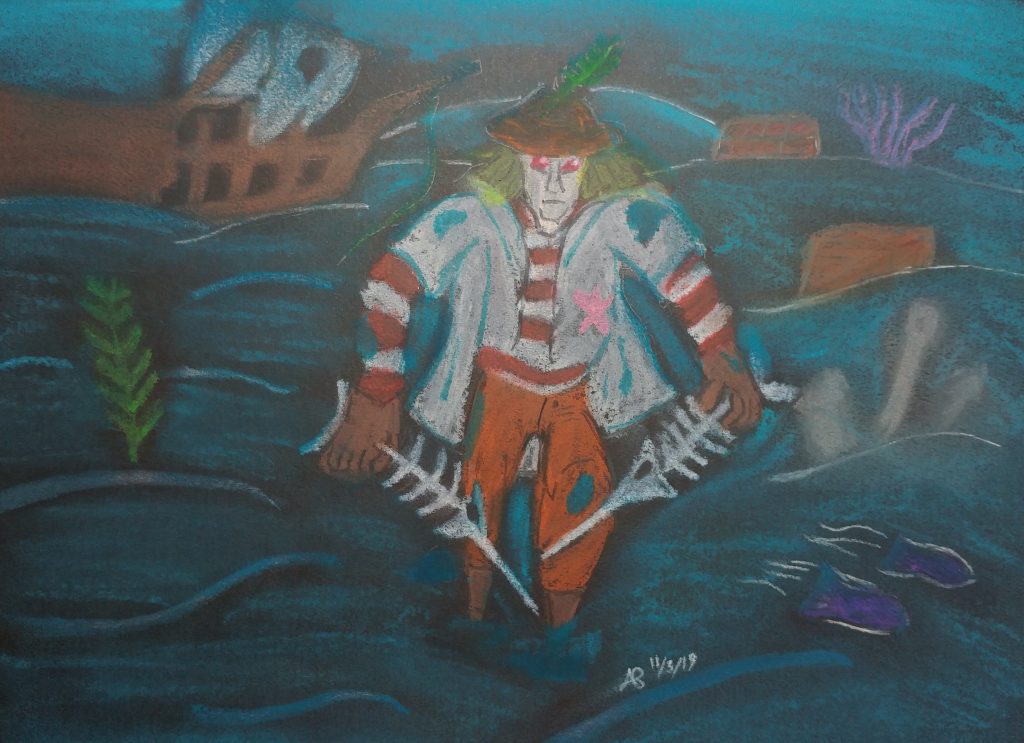 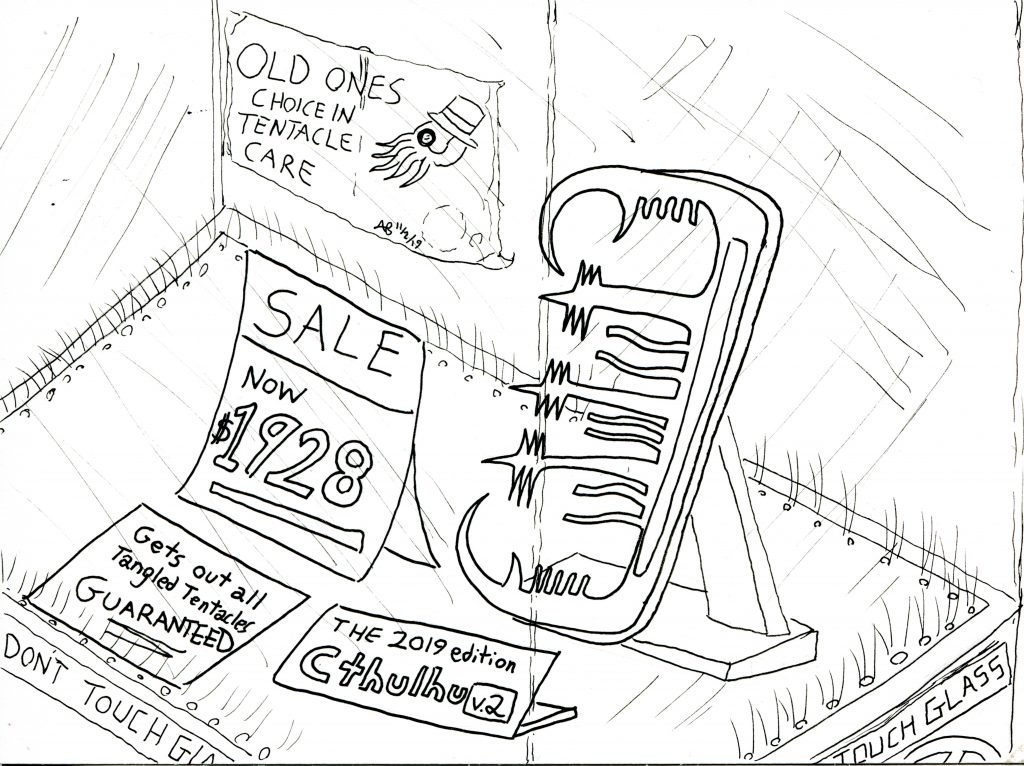 Do you suffer from tangled tentacles? Have all other combs let you down? Then summon yourself to your nearest Old One’s Boutique Store. Get the finest comb ever made from our former employees bones. The 2019 Cthulhu Comb version 2! Say goodbye to those tangled days after 300 million years of dormant sleep. You’ll be wowed by the fine line precision real teeth on each part of the comb. Stop by during our Monstervember sale today to get this at the low low price of $1928.00. This sale ends today.

Can’t make it? Stop by tomorrow for a swordfish. We don’t know what it’ll do yet, but stop by. 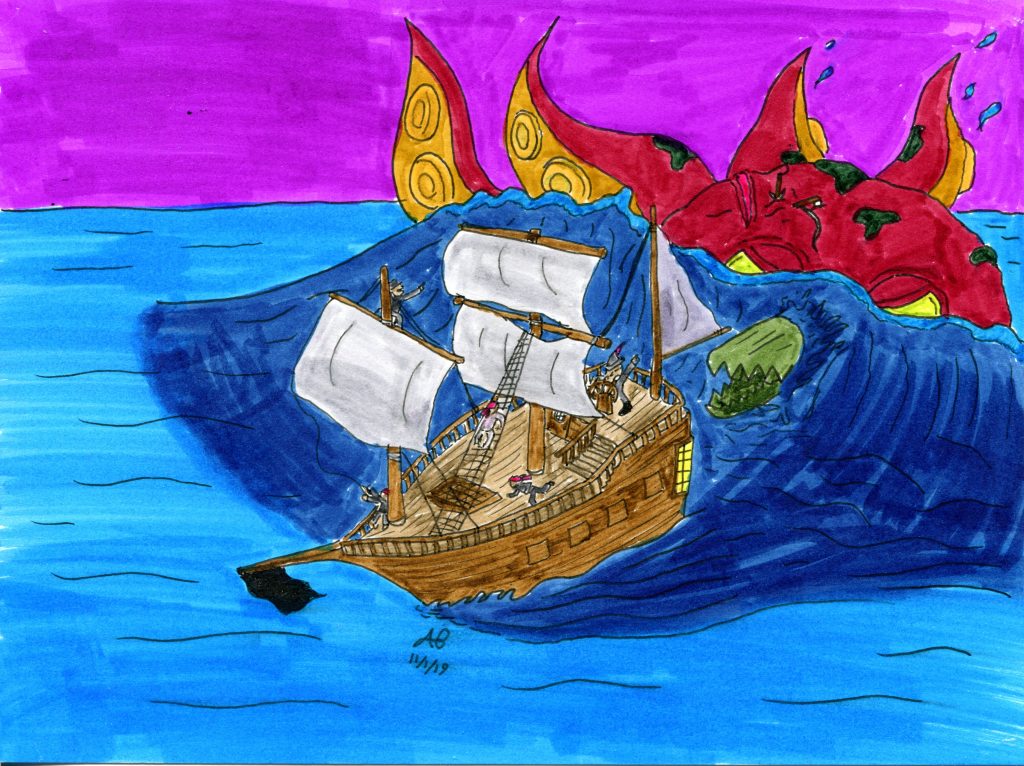 This one is a challenge prompt that’s brand new this year, and I hope that people will join in and have fun with it. It’s not about doing daily drawings, it’s about having fun and improving your art skills with practice. And making cool monsters.

Today is Day 1 and the prompt is sail. Nothing can make one want to drop their sails and make haste across the open ocean like being chased by a Kraken.

Feel free to join in on this challenge. You don’t have to be a pro artist and you can make the prompt with any art media you want. Join the facebook group or just use #monstervember. So we can find your art and give it all the love it deserves.