It’s Inktober Day2 and today’s prompt is Wisp. A thin little girl is called to a wispy entity. Will it do her harm?

It’s the first day of Inktober 2020. Today’s prompt is Fish and I’ve been wanting to play with all these colored inks I got last Christmas. I have been working on a underwater coloring book and decided to use that as inspiration for this drawing prompt. I really like how it turned out. I drew a basic outline in blue pencil and then drew over it in black ink with my dip pen. To color it in I used my set of India inks. 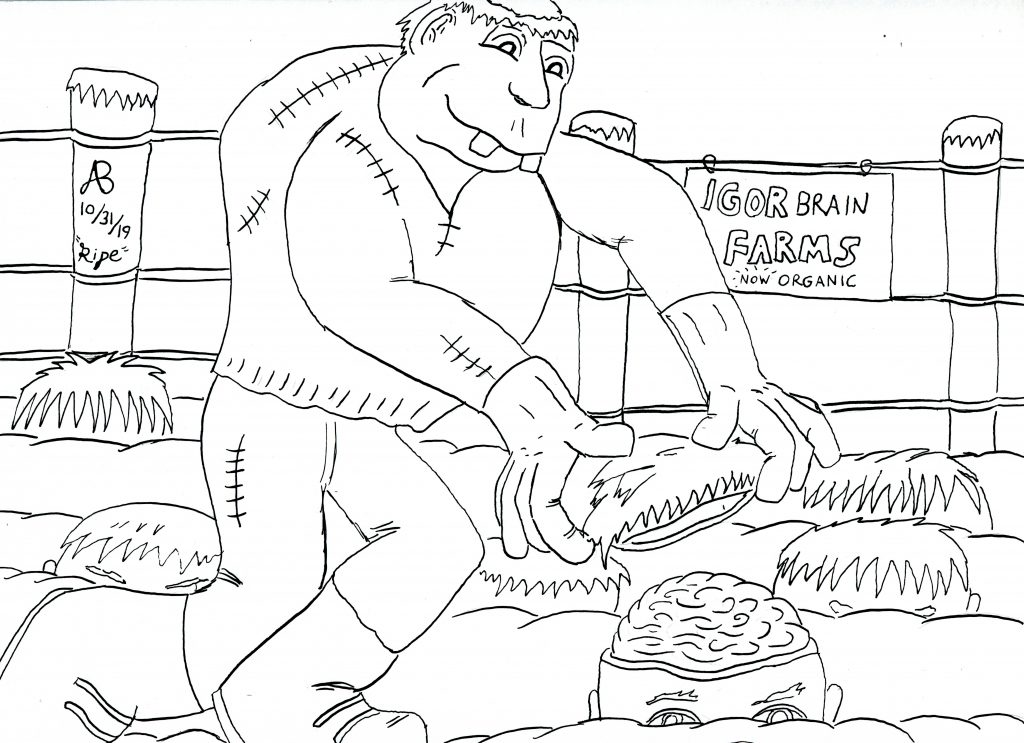 We come to the bottom of our ink well. It is day 31 of Inktober. Happy Halloween! Today we are going to the farm to help Igor pick the Ripest brain out of the organic head patch. A much more economical and legal way of collecting brains for the mad doctor. No more digging up graves in the middle of the night for poor Igor here. Now he is a hard working farmer helping supply the mad scientists of the world.

It has been a blast drawing all these. I learned how to use an ink well supplied pen and I love it. I feel a have improved my art skills this month. Especially my female figure drawing and figure drawings in general. They are still cartoons but more anatomically correct. I plan to keep working on a drawing and blog post a day or at least one every week. I hope you will check in and see what I make in the future.

I am off to go enjoy this Merry-Ween day. (even nature is setting up for Christmas too early in the states.) 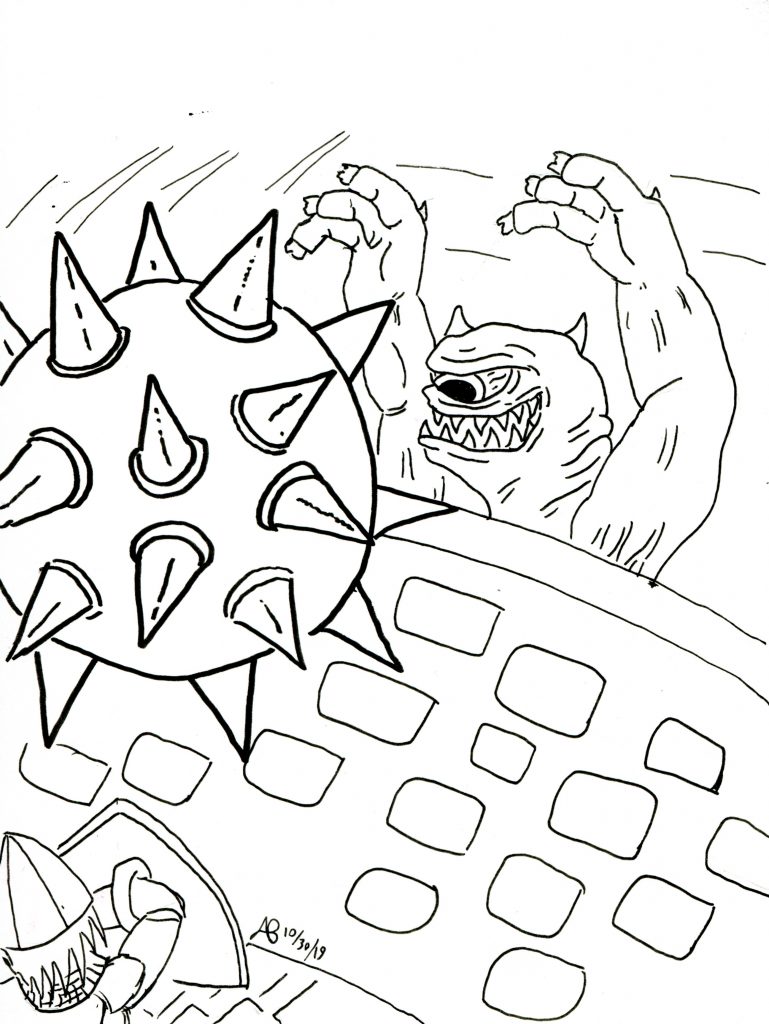 Hopefully that shield is reinforced cause that’s a big spike ball being thrown by that mean nasty cyclops there. I always imagine cyclops’, trolls or hulking goblins having a very dumb personality about them with very lame catch phrases. “Catch!”

While you’re at it catch this coloring page too and see if you make it. 2019 Inktober Day 30 Catch Coloring Page

See you tomorrow for our final day of Inktober, Day 31, Ripe. 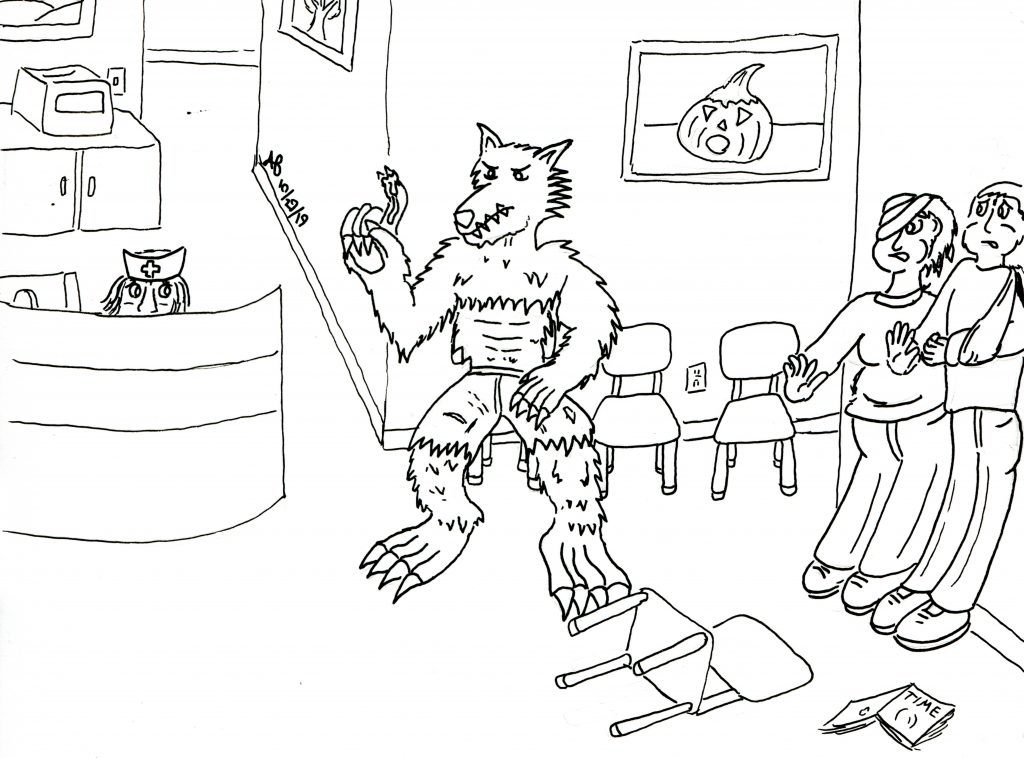 It’s day 29 of Inktober. With only two days left of the official horror season. I’d like to issue a public service announcement.

Injuries can happen to anyone and require a visit to the emergency room. So please remember to not judge another person based on their injury. You can’t instantly know what that person or monster has gone through while getting that injury. So please be kind and treat all people and monsters with respect this Halloween. Thank you.

For Parents: Use the following coloring sheet as a learning tool to teach your children how not to react when they see a monster in the waiting room. 2019 Inktober Day 29 Injured Coloring Page

See you tomorrow for Day 30, Catch. 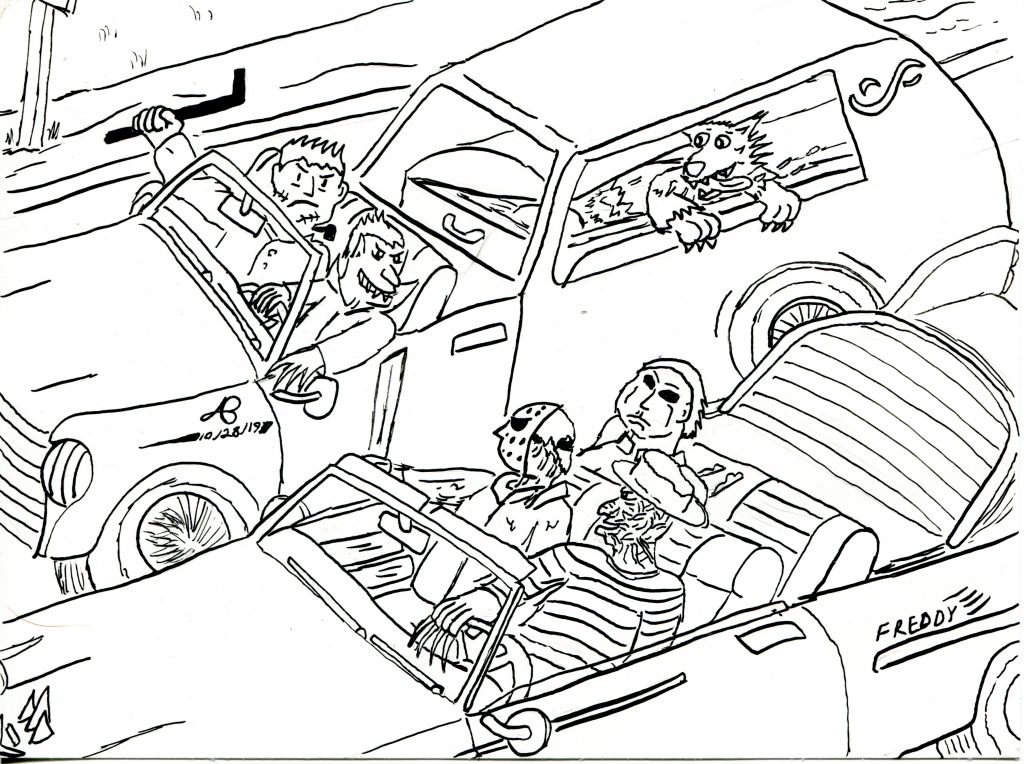 Tonight it’s the drag race of the century. The classic monsters vs. the horror legends. Who will win? What ride would you get in?

Why not color it and decide for yourself? 2019 Inktober Day 28 Ride Coloring Page

See you tomorrow for day 29, Injured. 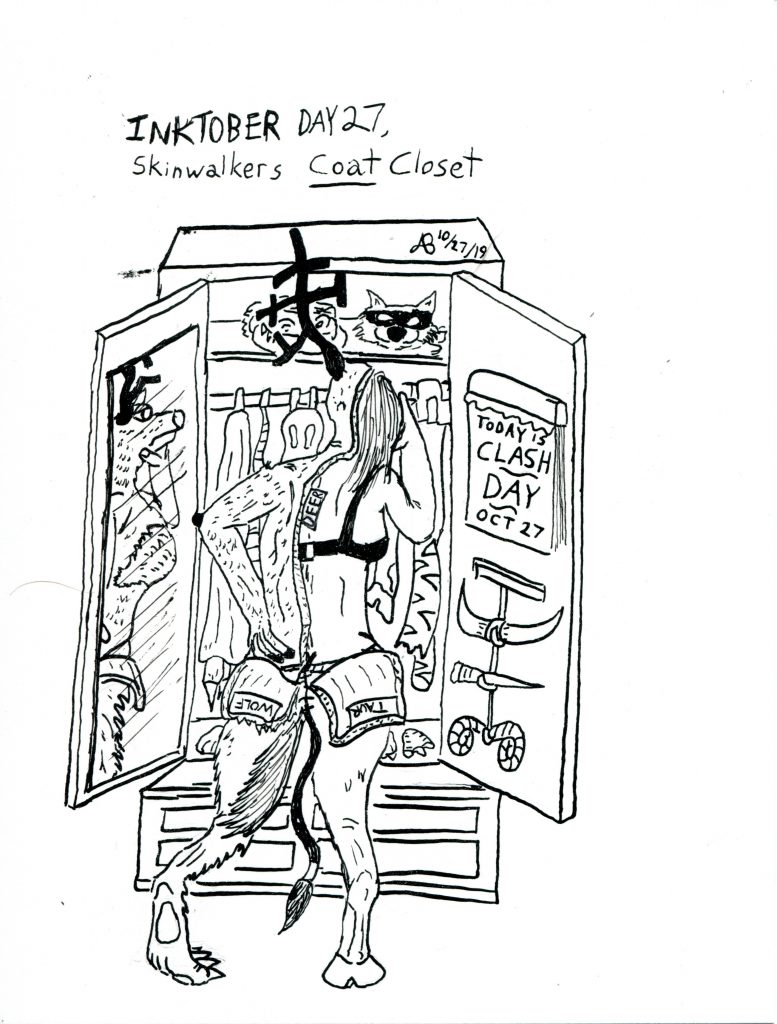 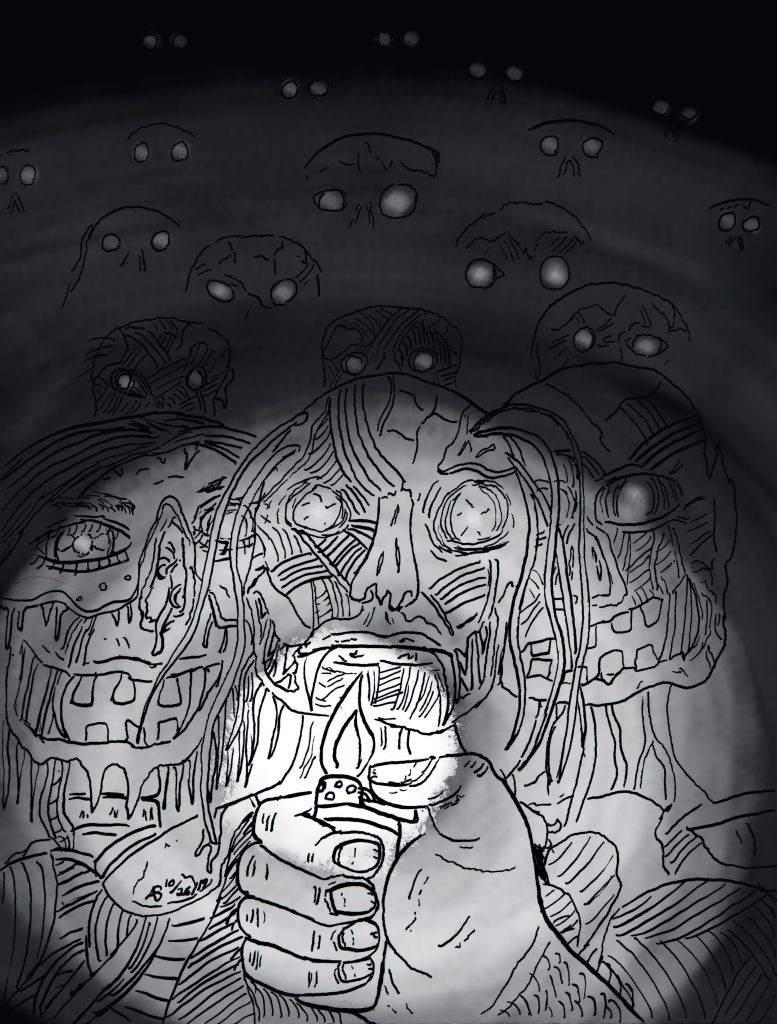 Sometimes you don’t want to know what’s in the darkness. It’s day 26 of Inktober and we’re playing in the dark today.

I never really messed with zombies/ghouls in major detail but tonight I did and it turned out so cool. I love the designs of my three zombies in the foreground here. The hand holding the lighter turned out well too. I spent quite a bit staring at my own hand clenched like it was holding something to get the right creases in the skin. Think I got it really good, including my hairy arm. lol. I didn’t want to cover this drawing in ink to make it look dark so I used a black layer with a clipping mask in photoshop to allow the drawing to slowly be “lit” up in the darkness, behind the black layer.

I included a non darkness version for anyone to color and add their own darkness if they want to. 2019 Inktober Day 26 Dark Coloring Page

See you tomorrow for Day 27, coat. 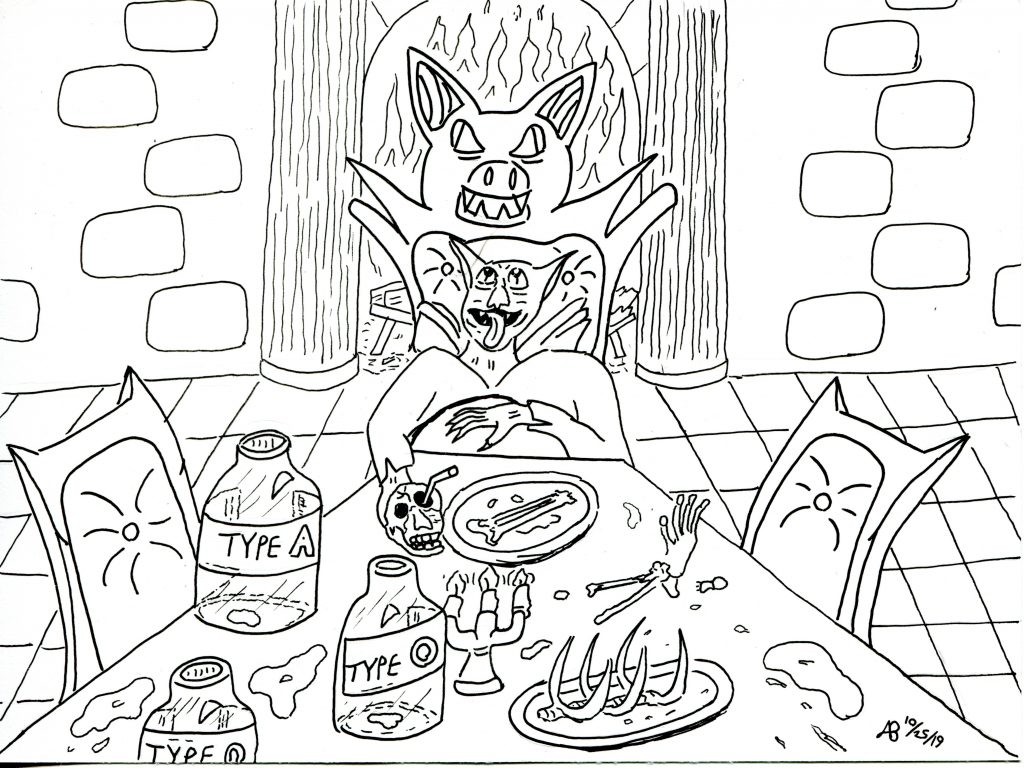 It’s day 25 of Inktober and the terror of the night has already gone and stuffed himself full of tasty treats.

Today we come into the manor of a vampire lord and see him exhausted and overstuffed at his dining room table. All that blood and human gore will make ones tummy quite upset. Be sure you don’t spoil your appetite with any tasty treats tonight kiddos. You’ll need that room for Halloween.

Why not color the hunger for candy away with tonight’s sketch. 2019 Inktober Day 25 Tasty Coloring Page

See you tomorrow for day 26, Dark. 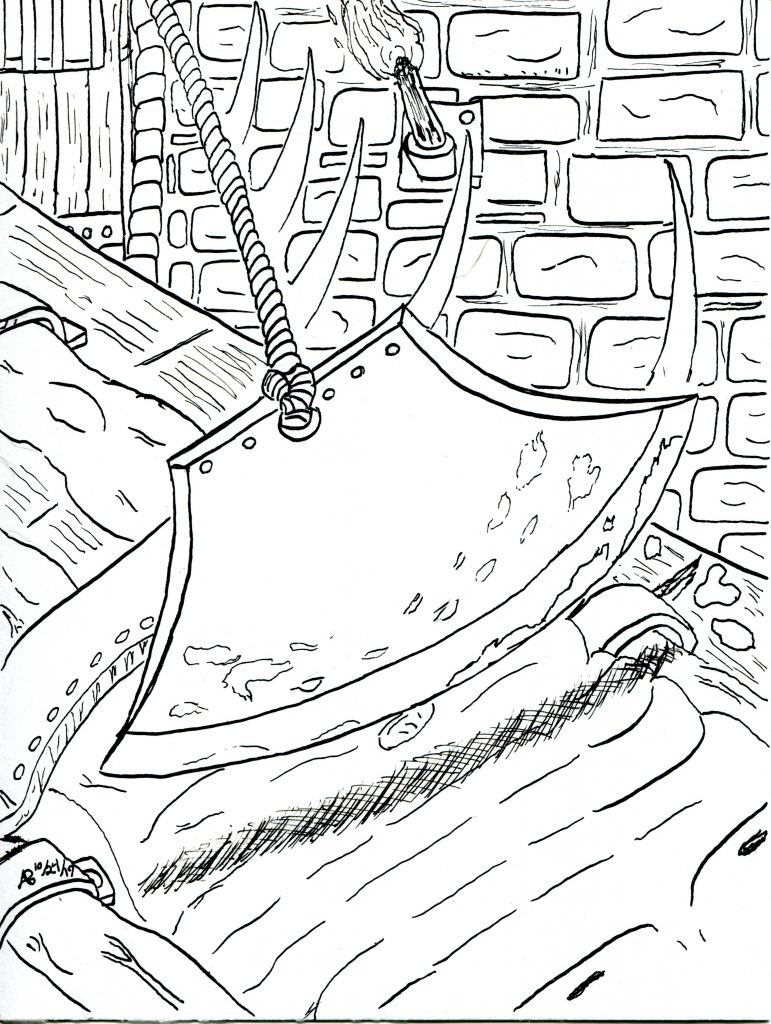 It’s day 24 of inktober and we are getting dizzy with horror as the swinging pendulum blade comes ever closer to sealing our fate.

See you tomorrow for day 25, tasty.